Maple Ridge, B.C. – Mission and Ridge Meadows RCMP, along with a member of the Metro Vancouver Transit Police (MVTP) have arrested 39 year old Kevin James Vanderwal after he was allegedly seen driving a stolen pickup truck.

Around 8:20 a.m. Monday November 21st Ridge Meadows RCMP received a report of a Ford F350 pickup being stolen from a residence in the 11000 block of 236A Street during the night before.

At approximately 2:40 p.m. Monday members of Mission RCMP observed the truck travelling on Silverdale Avenue in Mission. Police followed the truck at a safe distance, and at no time did a police pursuit take place. Ridge Meadows RCMP officers were alerted that the truck was travelling into Maple Ridge.

The aggressive driving exhibited by the male driver was noticed by an off duty MVTP officer who saw the truck stop and the male driver got out and run. This officer pursued the suspect on foot, apprehending him a short distance away, and he was turned over to Ridge Meadows RCMP.

Corporal Brenda Winpenny said, “What is very note worthy is all officers involved minimized, as best they could, the danger to the public. Mr. Vanderwal is very well known to police in both Mission and Ridge Meadows and he has a long criminal record for similar crimes. Police also want to commend the actions of the citizens who assisted in the arrest, ensuring the off duty officer was safe.”

Transit Police Chief Doug LePard added ,”I am very proud of S/Sergeant Henycez for the actions he took even though off duty. Our successes as police departments often hinge on our partnerships with one another. This is an excellent example of two agencies working together to take someone who is a risk to our communities off the streets. Well done!”

Vanderwal was held in police custody, appearing in court on Tuesday (November 22) where he was remanded in custody. He is now before the courts on charges of vehicle theft, possession of stolen property, obstructing a peace officer, dangerous driving, and failing to stop for police.

An officer who was part of Transit Police’s origins was killed on duty over 100 years ago, and he will be honoured in September as part of the BC Law Enforcement Memorial.

Charles Painter was employed as a night watchman and held the office of Special Constable for the British Columbia Electric Railway Company (BCER). In the early hours of Friday, March 19th 1915 while on duty on Willow Street in Vancouver, he saw a man approaching carrying a bundle of wire. Believing the wire to be stolen, he challenged the man and arrested him. A struggle ensued and Special Constable Painter’s revolver was taken from him and he was shot in the abdomen before the suspect escaped.

Charles Painter succumbed to complications resulting from his wound a few days later after providing a statement to police. While contemporaneous media reports connected a man who was later brought to trial in Seattle for the murder of two people in that city, no charges were ever bought in the case of Special Constable Charles Painter. He was laid to rest in a now unmarked grave in Mountain View cemetery, Vancouver.

While Metro Vancouver Transit Police may only be just over a decade old it can trace its roots back to the turn of the 20th Century. Research has unearthed a great deal of information about how policing and security of the hydro lines and transit in those early days of the last century evolved into our modern day police service. We can thank Constable Graham Walker for researching much of what we know about the evolution of our organization.

This research included the discovery of Special Constable Charles Painter’s death while carrying out his duties. Further research showed that his death was not recorded on the BC Law Enforcement Memorial (BCLEM) Honour Roll although he qualified for inclusion.

Following an application to the BCLEM for the recognition of Special Constable Charles Painter, we are pleased to announce that the application has been accepted. Special Constable Charles Painter will be remembered along with RCMP Cst. Sarah Beckett at the annual BC Law Enforcement Memorial event at Brockton Oval in Stanley Park, Sunday, September 25, 2016 at 1:00pm. Everyone is welcome to attend. 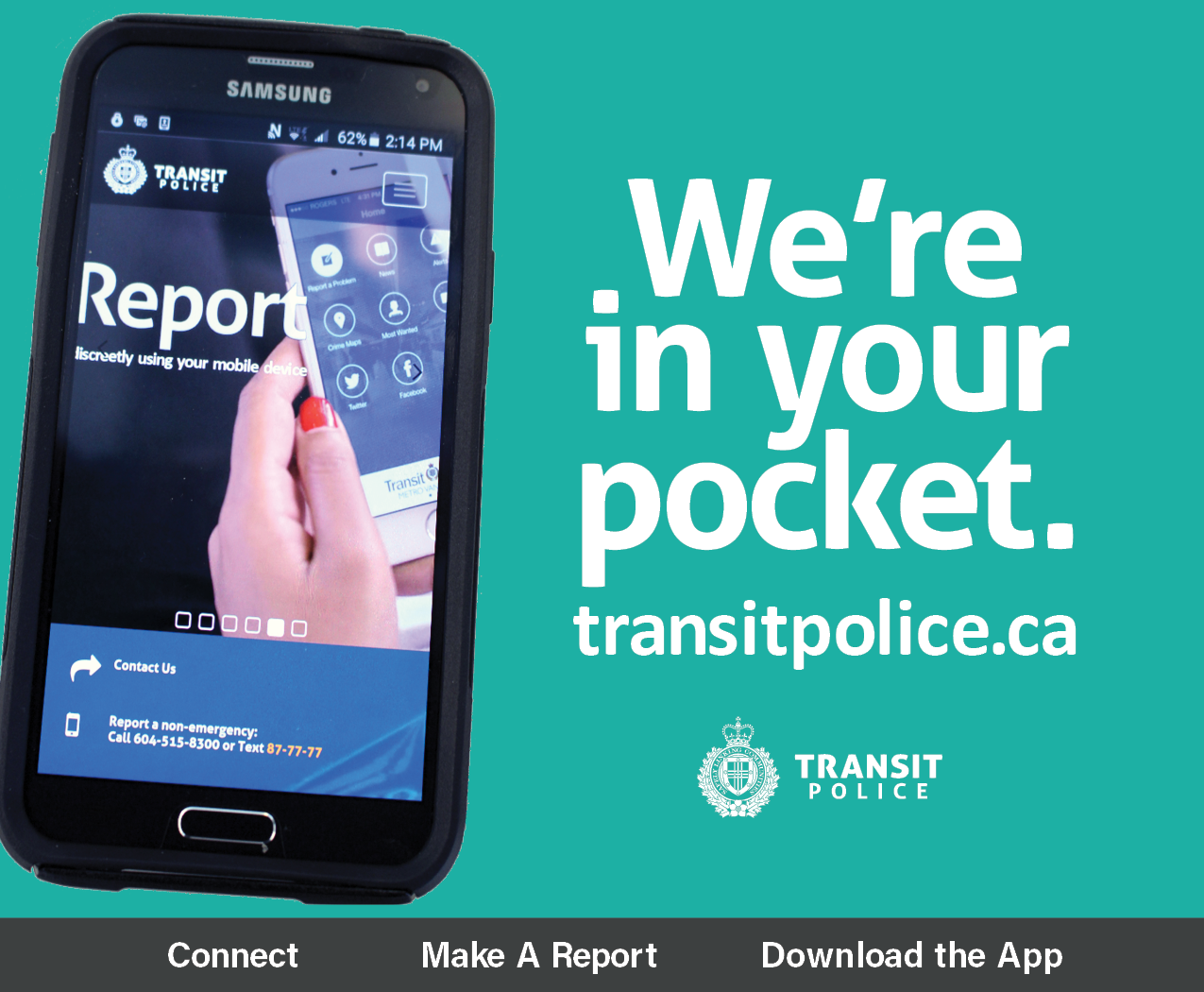 Metro Vancouver Transit Police are traveling with you. Our brand new mobile-friendly website means that it even easier to say something, when you see something, all with your mobile phone.

Visit transitpolice.ca to discreetly report a non-emergency police issue, contact us, download the OnDuty app or text 87-77-77. We take each report that we receive seriously. Check out the safety tips section to find out more about how to keep yourself and your belongings safe while on transit.

Essentially, visiting transitpolice.ca means that you have Transit Police in your pocket on your journey. You can help us keep transit safe. If you see something, say something.

On Wednesday March 18, 2016, Doug Lepard was sworn in as Transit Police’s new Chief Officer at the Oath of Office ceremony. The ceremony was attended by numerous dignitaries including Assistant Deputy Minister and Director of Police Services Clayton Pecknold, members of the Transit Police Board and TransLink executive.

“Like all progressive police agencies, the Transit Police is evolving, and we will continue to work towards the most effective and efficient model, in collaboration with TransLink and other stakeholders, to provide public safety for the “moving city” that is our public.” said Chief LePard.

Transit Police is pleased to announce that a name was selected for our new explosives detection dog.

The winning name for our newest recruit, a one year-old, female, chocolate lab is Kona. Kona means “Lady” in Hawaiian and is a popular dark brown Hawaiian coffee.

Over 640 contest submissions were received from Fort St. John to Sooke and everywhere in between.

Kiana Onyango, a Grade 7 student from Aberdeen Elementary School in Kamloops, B.C., was the contest winner. Kona and her handler Cst. Aaron Chan will be visiting Kiana’s school. Congratulations Kiana!