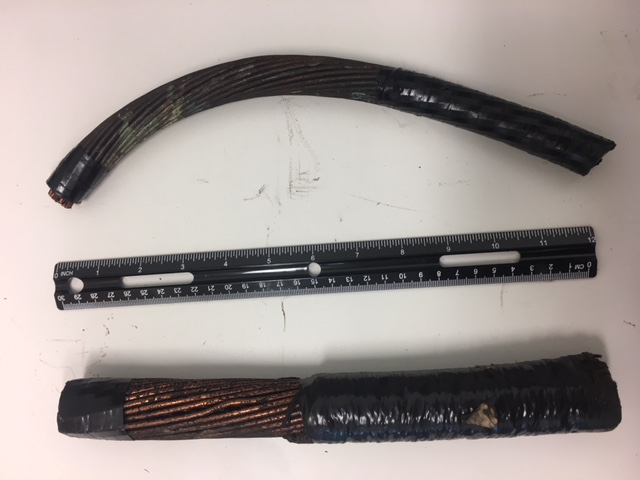 New Westminster – A recent theft of Coast Mountain Bus Company trolley wire, which created an extreme risk to the public, has caused the Metro Vancouver Transit Police to appeal to the public for assistance in finding the culprits.

In the past two years, the Metro Vancouver Transit Police has investigated almost two dozen incidences of theft of trolley wire throughout the City of Vancouver. Each incident has the potential to create lengthy service delays and can incur replacement costs of several thousand dollars up to $50,000.00.

Recently, persons involved in these thefts have shown a total disregard for public safety. On January 13, 2018, a wire theft in the area of Blanca Street and West 7th Avenue, in Vancouver, resulted in live trolley wires left dangling only feet from the ground, over a sidewalk. Two teenagers walked by the wires while heading home and reported the situation. Trolley wires power electric buses and carry 600 volts of electricity. A person making contact with these live wires would likely be killed. As TransLink advised publicly following the incident, anyone spotting dangling wires is warned not to touch them and to call police immediately.

Wire theft is a systemic issue across North America and is a challenge for police everywhere. The offence is popular as copper wire is extremely valuable. Because these offences typically occur at night when there are fewer potential witnesses, usually between 10:00 pm and 8:00 am, and in any part of the city where trolley wire is used, and because the wire is not uniquely identifiable if found in someone’s possession, successful investigations are challenging.

The Metro Vancouver Transit Police is asking the public to act as our eyes and ears in the community and to report anything they believe might be suspicious regarding trolley wire thefts. There is the possibility that persons involved in the thefts are using sophisticated equipment and machinery and may look like legitimate utility workers. Anyone spotting suspicious activity which may include cutting, dragging or chopping wire or unmarked vehicles involved with wire during the night, is asked to call Transit Police on our tip line at 604.516.7419, text us at 87.77.77, or call 911.

Please remember these thefts pertain to trolley wires, not wires related to the various utility companies.

Metro Vancouver Transit Police Chief Doug LePard stated, “It is extremely important we find the persons responsible for endangering the lives of our citizens and causing delays and expense to our bus system. We ask the public to contact us with any information they believe might be useful.”