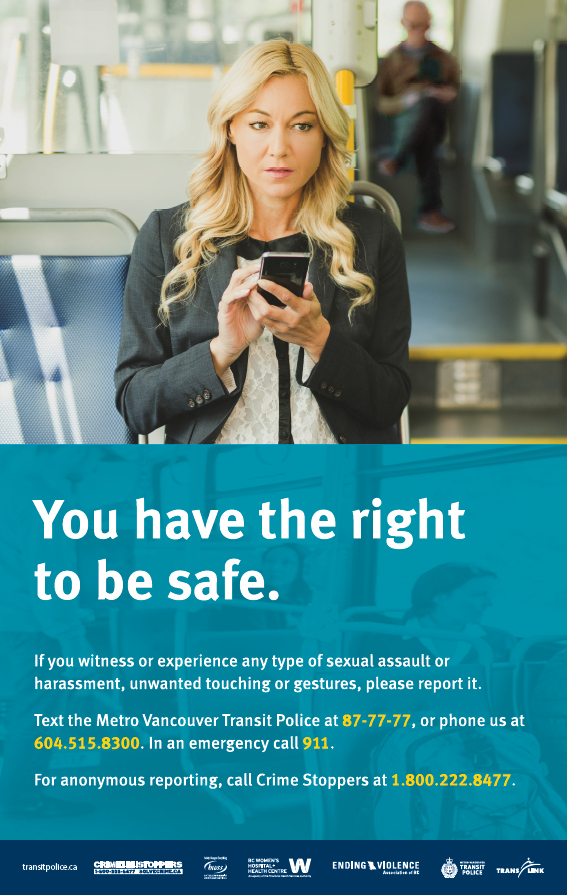 New Westminster – The Metro Vancouver Transit Police are today launching the next phase of their ongoing campaign against sexual offending on our transit system.

In 2012, Transit Police designated sexual offending on transit as one of the top four priorities for the police department. In January of 2013, phase one of our anti-sex offence campaign was launched with a train the trainer session at the SFU Downtown Vancouver Campus. Instructors from all of the colleges and universities with ESL programs in greater Vancouver, and all of the ESL schools in greater Vancouver, were provided with information and resources regarding sexual offending on transit and asked to go back to their schools and provide this information to their students. ESL students were the first focus group because they were often targeted as particularly vulnerable transit users, for sexual offending, and much less likely to report this kind of offence.

In November 2016, Transit Police launched phase two of our anti-sex offence campaign, “Unwanted Touching is a Crime”, in which 80 posters were displayed in SkyTrain cars for two months, amongst other strategies. Recommendations from that campaign included extending the length of campaigns on the transit system, increasing visibility on buses and at SkyTrain stations, as well as on the trains, and targeting the spring and/or summer, when a higher number of sex offences are reported.

As a result of those recommendations, phase three of our campaign is being launched today and will continue through to mid-September. It is much greater in scope than phase two, with 340 ad spaces allocated on SkyTrain cars, 15 ads at SkyTrain stations in addition to the LCD screens, 300 ads on buses and 15 bus loop ads at Lougheed, Edmonds and Carvolth Exchanges. An additional 35 platform posters will be placed at SkyTrain stations in mid-July and a strong partnership with Metro Vancouver Crime Stoppers will provide advertising support across Metro Vancouver, throughout the summer.

The purposes of the campaign are to reduce the number of sex offences occurring on our transit system by making it an unwelcome environment for offenders, to increase the number of sex offences reported to Metro Vancouver Transit Police so that victims can be supported and offenders can be arrested and prosecuted and to provide safety messaging and police contact information to our passengers.

This type of campaign is only successful when it involves strong professional and community partnerships. We are fortunate to have a number of such partners involved. TransLink has been extremely generous with their commitment to ad space on the system and to the safety of their passengers. Consultation with and advice from Battered Women’s Support Services, Ending Violence Association of BC and BC Women’s Hospital – Sexual Assault Service has been invaluable and we are very grateful to each of these organizations. As mentioned, Metro Vancouver Crime Stoppers is generously providing advertising support across Metro Vancouver.

Chief Doug LePard stated “All passengers using our transit system have the right to travel without fear of being assaulted or harassed. It is our commitment at Metro Vancouver Transit Police to provide that safe ride, and to let passengers know that any sex offence reported to us by victims or witnesses will be taken seriously and investigated thoroughly.”