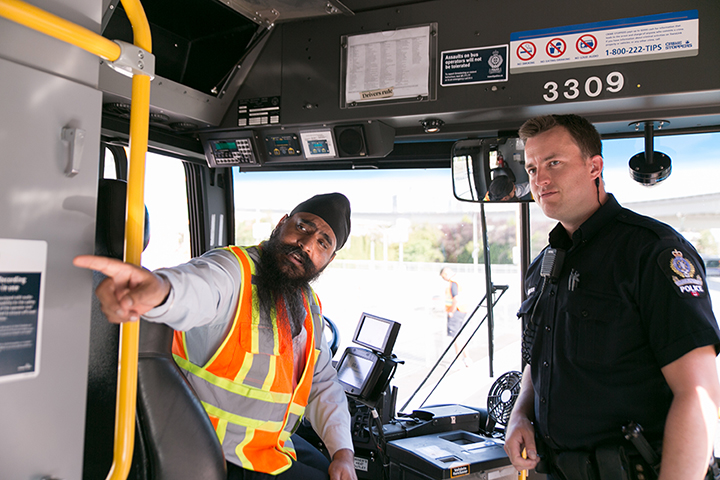 A 40 year old Burnaby man has been remanded in custody following his arrest for allegedly sexually assaulting a Coast Mountain Bus Company (CMBC) operator in a moving bus.

On January 12, 2017, at approximately 6:45 pm, a man boarded an eastbound CMBC bus at Holdom SkyTrain Station. As the bus travelled along Lougheed Highway, the man approached the bus operator several times, offering her candy and asking for information. Just as the operator was turning the bus left into Production Way SkyTrain Station, the man approached her again and asked her if she would like to go for drinks after work. As the operator was declining the invitation, the man allegedly reached his hand between her legs, fondling her.

The operator pushed the man’s hand away, pushed the alarm and continued driving the bus into the bus loop. The man got off the bus and walked into the SkyTrain station. The operator continued on to Lougheed Station, where she was met by Metro Vancouver Transit Police officers, and provided a description of the suspect which was broadcast to all front line employees.

A short time later, a SkyTrain Attendant advised Transit Police she had just seen the suspect on a westbound train on the Evergreen Line. The train was met by a Transit Police officer at Moody Station and the suspect taken into custody.

Arrested and charged with Sexual Assault was Mohammed SAHIB, previously known to police. SAHIB was also arrested on an existing Burnaby RCMP warrant for Theft under $5000. He has appeared in court and been remanded in custody to January 30, 2017, when he will make his next appearance in Vancouver Provincial Court at 9:30 am.

“I commend this bus operator for her presence of mind in an extremely difficult situation” said Transit Police Chief Doug LePard. “By calmly alerting the communications centre and maintaining control of her multi-ton moving vehicle, she ensured the safety of her passengers, pedestrians and other motorists in the area. She provided us with an excellent description of the suspect, in a timely manner, which allowed us to effect a quick arrest.”

Everybody’s journey, including that of bus operators, should be safe and violence free. All too often, bus operators find themselves subjected to harassing or violent behaviour which puts them and their passengers at risk. Just the evening before last, at approximately 5:20 pm, a passenger who was angry because her bus operator wouldn’t stop in between designated stops, threw a cup full of hot coffee down the back of the operator as she stopped her bus at the next designated stop at 152nd Street and 16th Avenue in Surrey. Fortunately, the operator was wearing multiple layers of clothing so was not physically injured. The suspect managed to leave the area, undetected.

In 2016, 101 bus operator assaults were recorded. This compares to 102 recorded in 2015. While we are holding our own statistically, there are far too many assaults of bus operators who are committed to moving their passengers safely from one location to another. Assaults on bus operators are a top priority for the Transit Police. Our commitment is to reduce the number of incidents and to ensure that those responsible are held accountable for their actions.