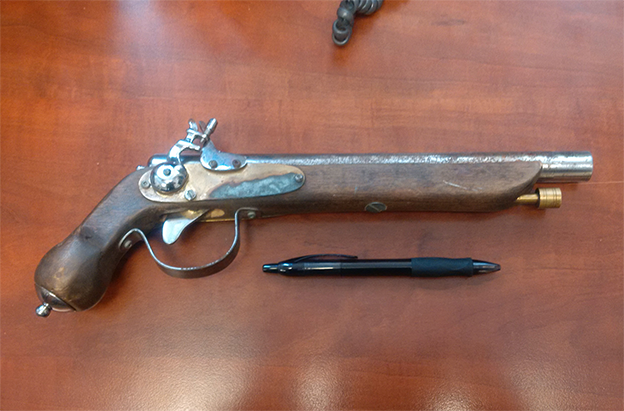 New Westminster – A report of a man with a gun, on a bus, resulted in his arrest a short time later.

At 1 pm, July 14, 2016, a passenger on Coast Mountain Bus 2524, en-route to downtown Vancouver, reported another passenger on the bus as having a gun visibly tucked into his belt. Further information  advised that the man had left the bus at Granville and Broadway.

The suspect was located a short time later, in the 1400 block West Broadway, by Transit Police officers. He was taken into custody without incident. The gun was located and seized. It was determined to be a  non-functioning replica of an old flintlock style gun.

Francis Boivin, 44 years, no fixed address and well known to police, was found to be in breach of two of  his  probation conditions: not to possess any firearms or replicas and not to be found in the area in which he was arrested. Boivin was taken to jail, made his first appearance in court and was released on a  Recognizance with similar conditions. His next appearance in Vancouver Provincial Court is scheduled for July 18, 2016.

The public use or display of replica firearms can be extremely frightening and dangerous. Members of the public who see these weapons have every reason to believe they are real and they may be in  danger. Police officers must treat these reports as though the weapon is real, until proven otherwise,  which can lead to tragic consequences.